Bridget and I flew out of Sydney to Auckland On Thursday 30th. 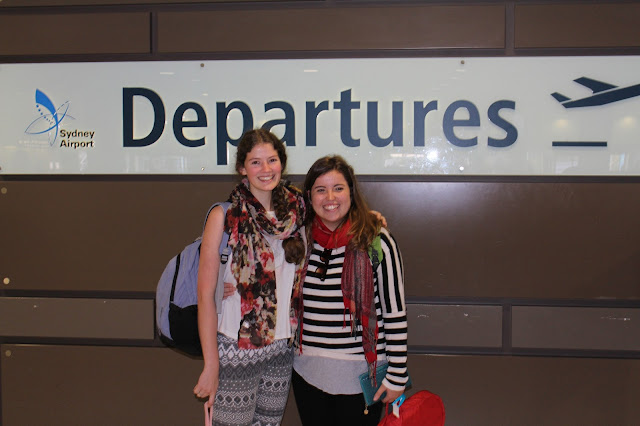 After a quick flight, we had to race to get to our connecting flight. Then we endured twelve hours. We had been checked into to very separate seats, but thanks to the kindness of the stranger next to Bridget, we were able to sit next to each other. We were in the middle two seats in the middle aisle between two business men, who both slept the entire journey. So when We finally arrived, it was pretty nice. 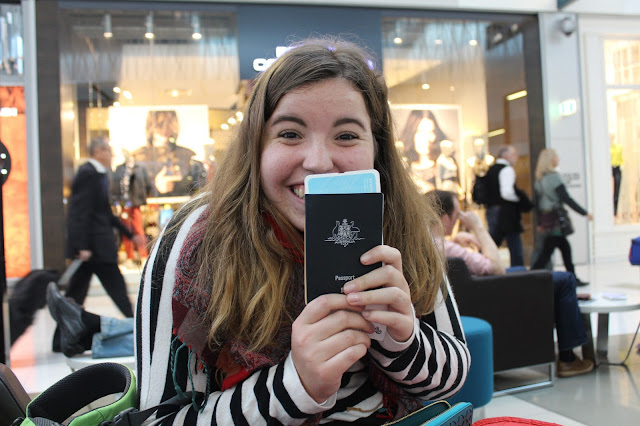 At LAX, we met up with Emma in a serendipitous moment (seeing as we had no phone so it was just lucky she found us!) Her fabulous Grandma Donna came and picked us up and gave us a driving tour of Venice. 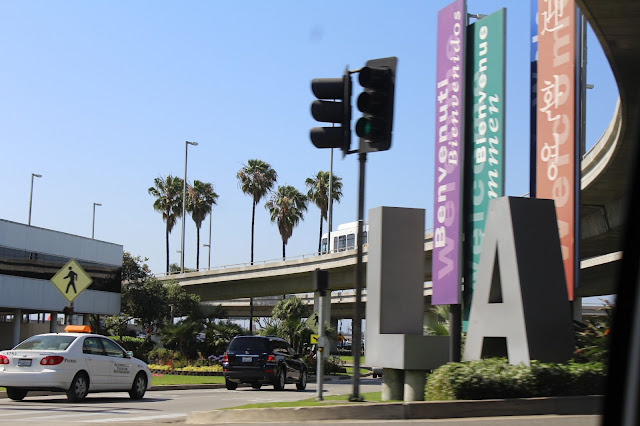 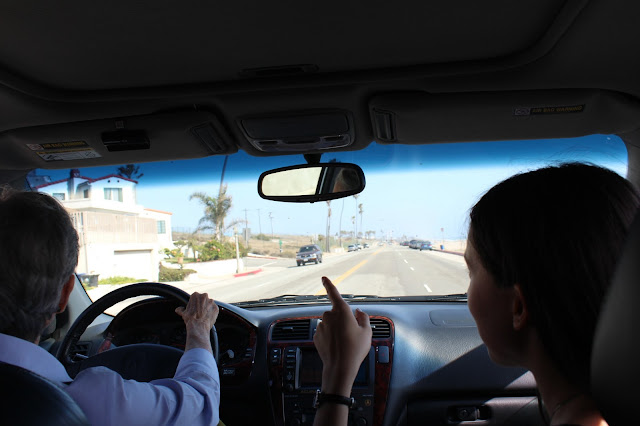 We settled into our home for the next week, which is Donna's amazing house in Venice, which she is kindly letting us stay in with her and Emma! We unpacked a bit and had Thai food for dinner (fabulous compared to the plane food we'd spent the last day eating) and totally collapsed after having about 3 hours sleep on the plane and being awake for about 30 hours!

This morning, we slept late (cheers jetlag) and then woke up and decided to walk to Venice and Santa Monica. We walked through the neighborhood, stopping off at 'Lemonade' for, appropriately, lemonade. Mine was Blueberry Mint and Emma's was Watermelon Rosemary. (You tumblr people might recognise the cups from hipster photos around the internet). 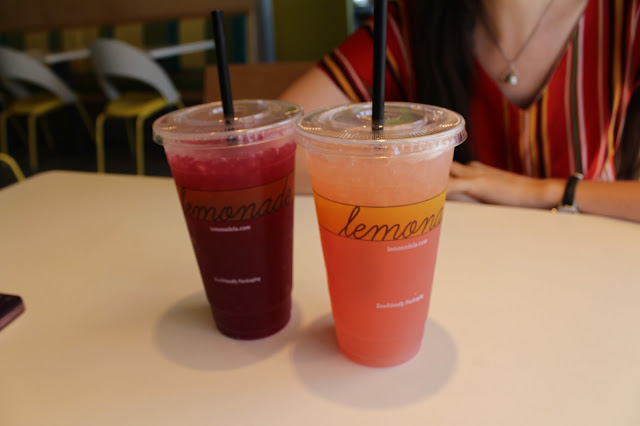 We reached Venice Beach and walked down the road towards Santa Monica. It's such an interesting spot, perfect for people watching, with buskers, street stalls selling everything from palm readings, to dream catchers to bongs (yep, medical marijuana is legal in California - people were selling that too, which we politely declined). 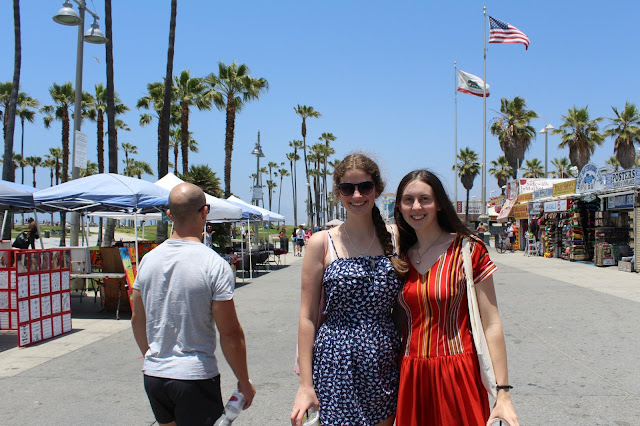 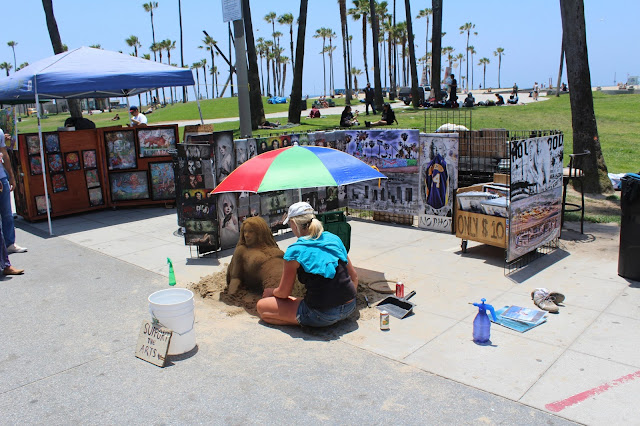 We got free drinks, which like the true backpackers we are, accepted wholeheartedly. 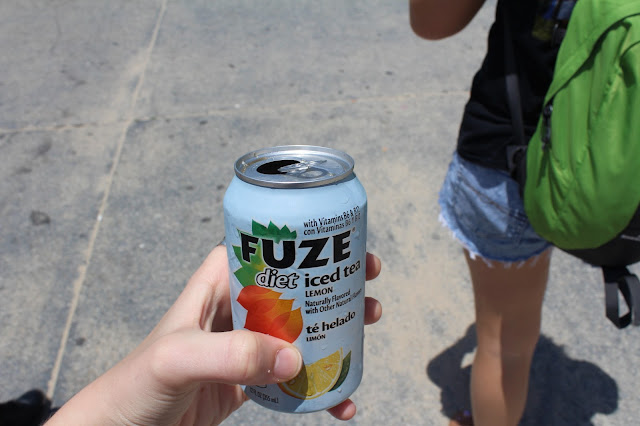 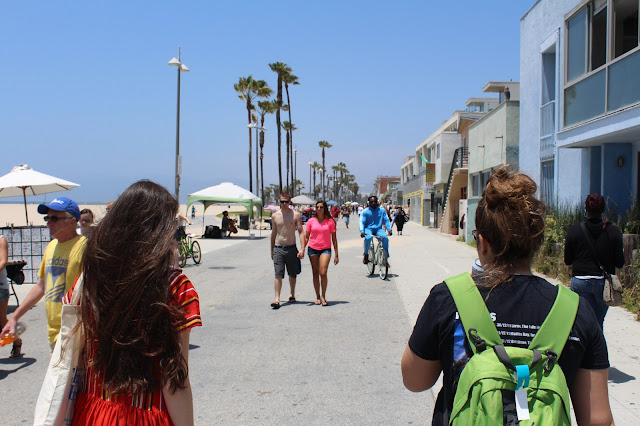 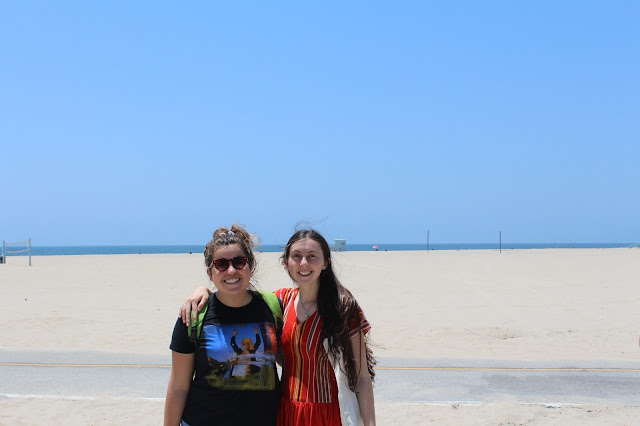 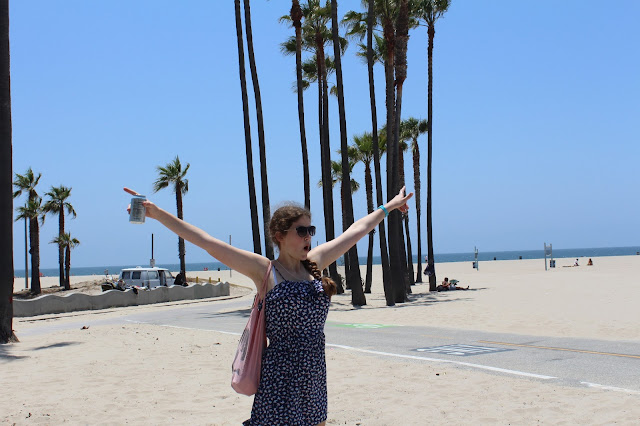 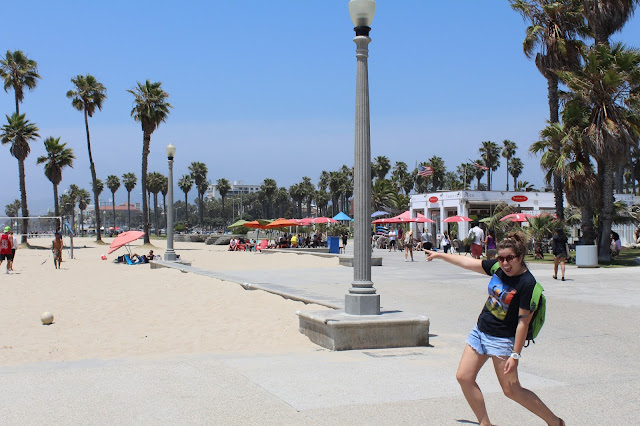 Eventually, we reached Santa Monica, and it felt like basically every single movie set in LA, ever. 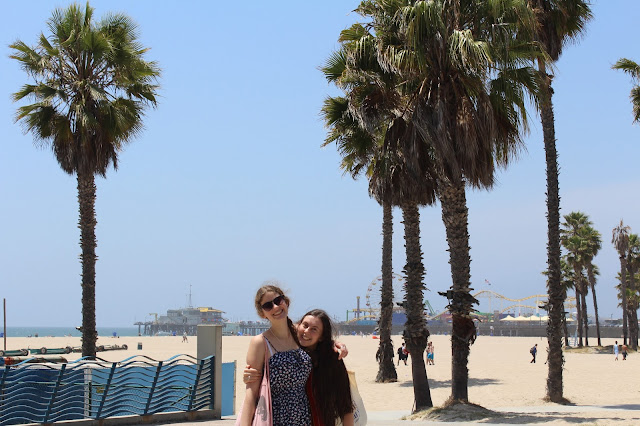 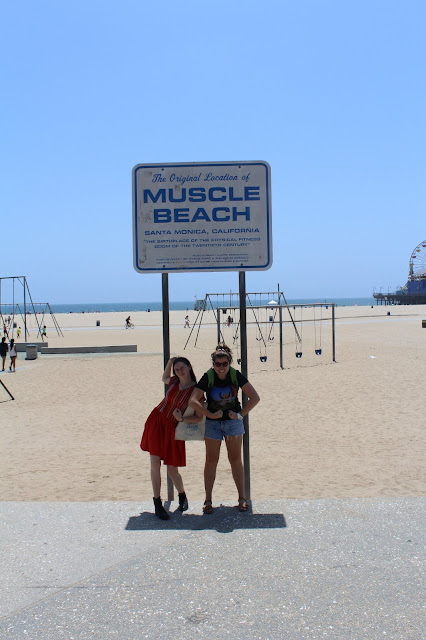 We had lunch at 'Tender Greens' in Santa Monica and it was fabulous (thanks to a recommendation from Donna - perks of staying with a local) and walked back to the pier. 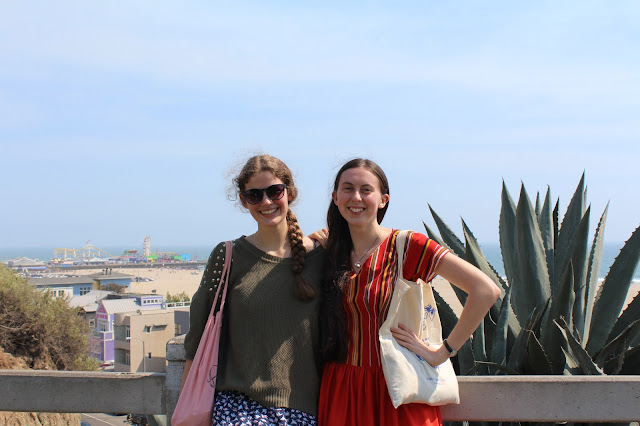 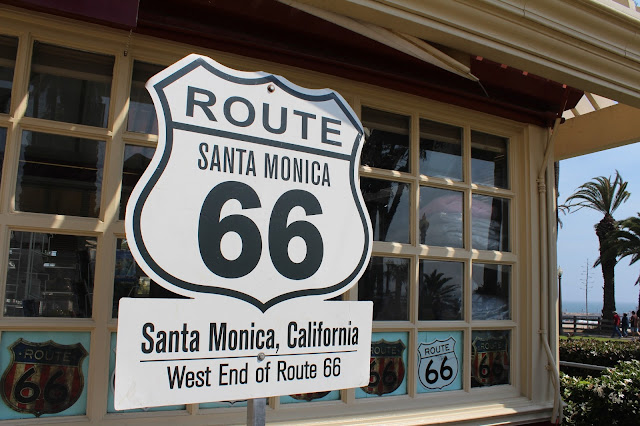 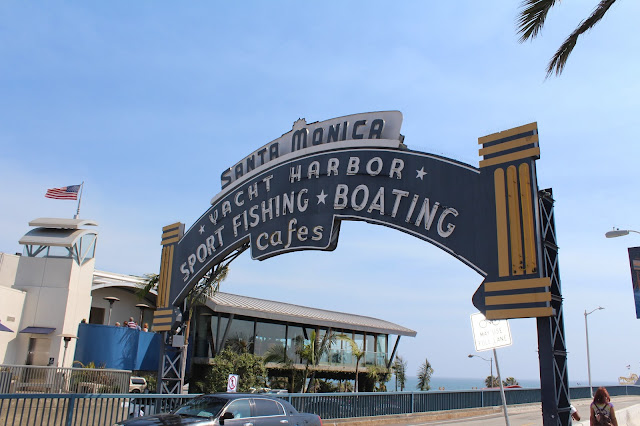 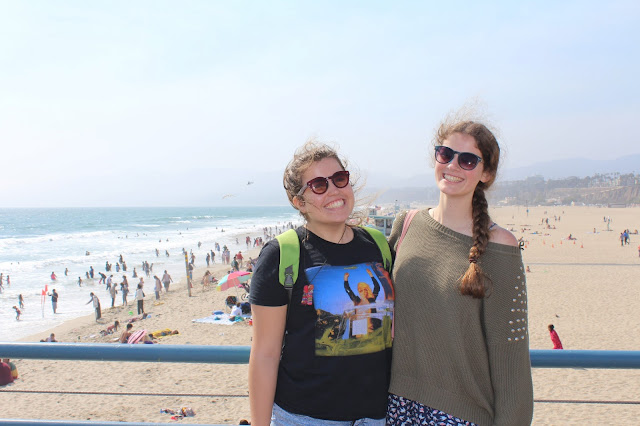 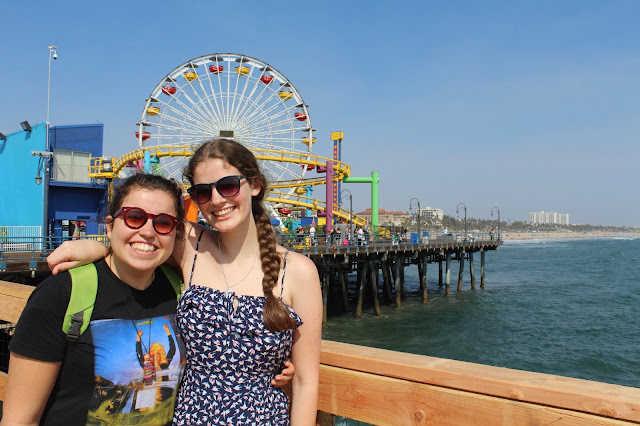 The pier was extra exciting, obviously. We walked along, enjoying the Cali sunshine and the quirky people along the pier. Then we walked back to the main road where Donna kindly picked us up and then we drove to the grocery store to grab some food for the week. Driving is still a novelty to us because it's the wrong side of the road. The traffic in LA is not to bad, but there's a super thick smog that covers the city. If some of the photos look a bit cloudy, that's smog, not clouds. And shopping in America is super exciting for two Australians. I mean, lucky charms. 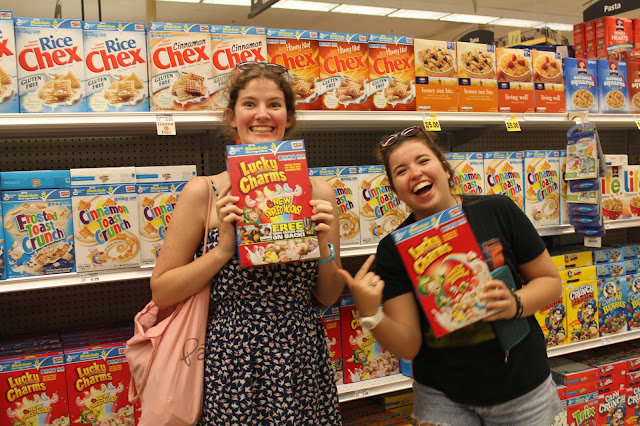 Even American food is patriotic. 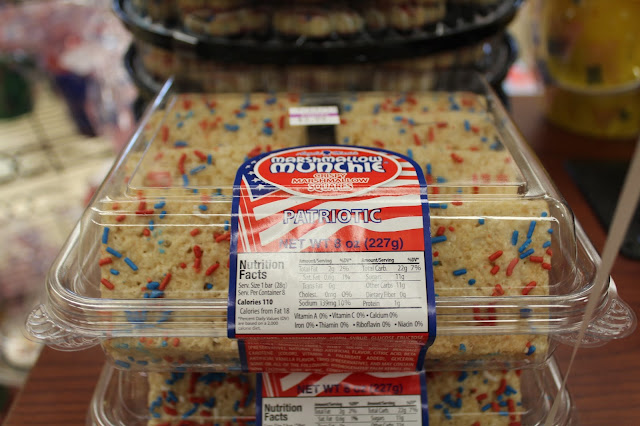 We came home and I napped while Bridget went for a walk around Venice and Emma hung out. Emma and I cooked ravioli for dinner, followed by a nutritious dessert of Captain Crunch Peanut Butter Cereal. We booked tickets to some Hollywood tours this week and made plans before preparing to passout which i will do...now.